It was a hot night at the Mt Elgon hotel especially for the people with no fans or air-conditioning! The group enjoyed a Mt Elgon breakfast so were in good spirits as we gathered for prayers with Heather and Brian before we set off to the ACET offices

At the ACET Mbale offices we were greeted by Naomi and Janet and the rest of the staff, many are new or interns. Naomi is due any day now, she has an impressive bump which is obviously not getting in the way of anything! Naomi and Janet sat us down and gave a clear and inspiring presentation on the work of ACET Mbale and the areas Love Africa supports.

ACET Mbale excels at delivering lifeskills programmes to teenagers, training teachers in life skills education for teenagers, HIV education and counselling and community mobilisation programmes in local churches through Community Action Groups. Many of the programmes ACET develops and then trains other organisations on, are piloted in Mbale, e.g. the work with men’s drinking clubs.  They always seem to be developing practical new ideas. The trainers recognised that girls were missing education when they had their period as they were unable to buy sanitary towels. ACET have developed a reusable sanitary pad that has been trialled and allowed girls to be educated consistently.

Naomi reviewed for us the programmes supported by Love Africa and consistent with our vision. These focus mainly on HIV education, HIV testing and counselling in Churches, counselling young people in life skills and training for teachers and peer educators.

There was a lot of interest and questioning from the group to Naomi and Janet around the delivery of the programmes, how the faith aspect is delivered integral to the programmes and the overall ACET organisation and strategy. As always people were hugely impressed with Naomi and Janet and Emma provided some great perspectives from the ACET policy point of view

As the concession to her pregnancy Naomi didn't come into the field with us (thank goodness) for the visits to two Church Community action groups The Churches were in quite distant communities in the hills above Mbale The group had a wonderful trip along terrible roads high into the hills in the most spectacular countryside covered with dense green vegetation and banana plants. On the way up it started to rain, drops at first then a tropical storm as we approached the church, so loud when we entered the church building from the rain on the corrugated iron roof that we couldn't hear ourselves speak

The first stop was at St James Church (!) in Busambatsa where we were greeted by Rev Ezra (dressed in a clerical collar and blazer) and the chair of the Community Action Group (CAG). Jacqueline introduced the CAG by saying "we help each other in troubled times" They work by Rev Ezra identifying people in need in the community, and he asks people in church to offer support (money in a basket or in kind) Members of the CAG visit the needy, offer prayer and words of encouragement and the gifts collected and practical support. 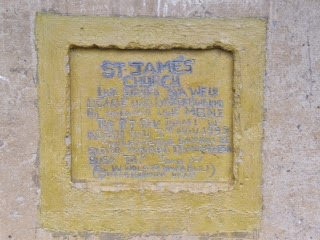 Several people offered testimonies of how the CAG from St James had reached out to them clearly in God's love, which covered assisting a handicapped member of the community, through encouraging and counselling people living with HIV and support for scholastic materials for orphans.

There were several examples of how ACET has supported the community with the hand of love. The CAG was trained in how to assist people living with HIV as previously there had been a high suicide rate of people who were diagnosed positive. ACET had also stimulated piggery projects. A beneficiary is given 2 piglets to raise by ACET. When the pigs breed 2 pigs are given back to the community for someone else and the rest kept by the beneficiary who can then sell them, breed again and gain some income usually to buy a cow, which is highly prized in the community. The cows will provide milk which is distributed in the community especially to the HIV positive people to improve their diet, or sold to help fund school fees and scholastic materials. It is a multiplier system where the initial gift of 2 pigs and the hard work of the individual or family generates income and improves their diet.

Rev Ezra then spoke (at some length) He has been vicar of 4 churches since 2007 (this is the Church of Uganda) He has been involved in raising up the lay leadership to supplement the small number of clergy in the deanery (41 people currently in training) to support the growth of the church.  His story seemed typical of large church leadership and he described a range of programmes the CAG led, the challenges of planting new churches (4 since 2007) and our group felt the similarities even on the top of a mountain in Mbale with Gerrards Cross!

The visitors were invited to offer a word of encouragement (Hebrews 4,12) and pray over the gathering

Rev Ezra was keen to show us his church extension project for St James and elicit our support. The foundations have been dug and they are ready to proceed. The church has raised UG800,000 towards rebuilding. Rev Ezra told me he needed UGS500 million (£136K) to complete the project, which seems a questionable use of resources.

On the way to the next church we were invited to the home of one of the CAG members to see his cows and pigs unfortunately again in torrential rain, apparently banana leaves make great temporary umbrellas

We drove on, now over cut up and muddy roads to Murumba Church This was a beautiful new building with a well built roof and marvellous windows and doors made by a local carpenter, big enough for the congregation of 300. (the Church leader told me it cost UGS5 million to build – that’s about £1100 - which seemed more reasonable)

Chairman Fred of the CAG welcomed us on behalf of the 30 members of the CAG (mostly female) and explained their work, programmes with orphans and vulnerable children (OVCs) a new savings and loan scheme, support for all aspects of HIV in the community, from encouragement for testing, to counselling and practical support. Several people gave testimonies of how the CAG had helped them or their relatives and they all praised ACET for how they had understood the need to help themselves. Currently the church supports 32 orphans, 8 widows and for the first time we heard they supported widowers (4)

This is a very remote, isolated and poor community. Several people said how unusual it was so see any white visitors, let alone 10, and how encouraged they were that we should be so concerned about them to visit (a real endorsement of the value of an exposure visit) Janet spoke to the Church and commended them on how well they had responded to the ACET training and how enthusiastically they had begun the programmes. There is still some resistance to testing for HIV in this area, an indicator of how early in the CAG process this church is compared to some of the communities we saw in Soroti

Jill offered the Church a word of encouragement from Galatians 6,2 in English and the local language which was much appreciated.
We were asked to visit the house of a sick lady and pray over her. Janet ascertained that this was "close near" not "near, near" The lady was very sick and Mandy offered some gracious words of prayer.

The journey back down the hill was interesting with the mud on the roads. At one point one of the ACET vans went down a hill slightly sideways and we had some deep mud holes to navigate but the drivers got us safely back down to the Mt Elgon Hotel after 6pm. We had some time to unwind before dinner with Emma and Ken at the hotel.

Edith and Nasta from UWCM arrived unexpectedly. The group were able to meet Nasta and and Frank spent some time in discussions on UWCM with Edith and Nasta

So, another fantastic day for the group. We saw the work of ACET Mbale at its very best. The communities we visited showed how transformation, through the church based CAG, motivated by God's love can occur. This fits so well with the Love Africa vision of church mobilisation as a vehicle for addressing matters of HIV/AIDS relief and caring for the poor.

After today’s experiences please pray with us: