The day started with a serious mismatch between the breakfast available and the number of guests at the Akello Hotel, Ugandan chaos you can only experience and not tell. Fortunately everyone had slept well so managed to retain a sense of humour on a limited breakfast for the day ahead

Sam the PEP leader from PAG Sororti came to meet us at the hotel and took us the the new-ish regional HQ for PAG for a briefing in the day ahead. We were welcomed and prayed over by Bishop Sam who has been in place for 6 months and seems to have established himself well. There is a large and varied team at PAG of staff and volunteers who enthusiastically introduced themselves as did the St James group. Sam explained the work of PAG Soroti and Pastor Patrick outlined the PEP process in a very informative session. Of note PAG supports 460 community projects in the region and the PEP process in the region has led to the set up of about 60 new schools.

Sam explained that the central and local government of Teso region are pulling back from HIV/AIDS support consistent with the Millennium goals and the priorities for health in Uganda and we would start to observe the consequences with the projects. With that we set off to make 3 site visits all 2-3 hours distant from Soroti.

The first visit was to Pingire where many people have been before. It was for half the group their first experience of an uninhibited Ugandan welcome with singing, dancing, ululating and unrestrained joy at the "dear visitors" presence. The church in Pingire has been completed (same as all the projects we visited) with a brand new roof and there was a big gathering of people to meet us. Following prayers and greetings the community leader explained the background of the PEP process since 2000 in Pingire with the priorities they set for health, education and roads and the environment. We heard several testimonies from members of the PEP groups on how lives had been changed through community action. Particularly moving was the testimony from Christine who is HIV positive being treated with antiretrovirals and she gave thanks to God for PEP which had kept her alive She is a testimony of  alive changed through PEP and the work of PAG supported by Love Africa. 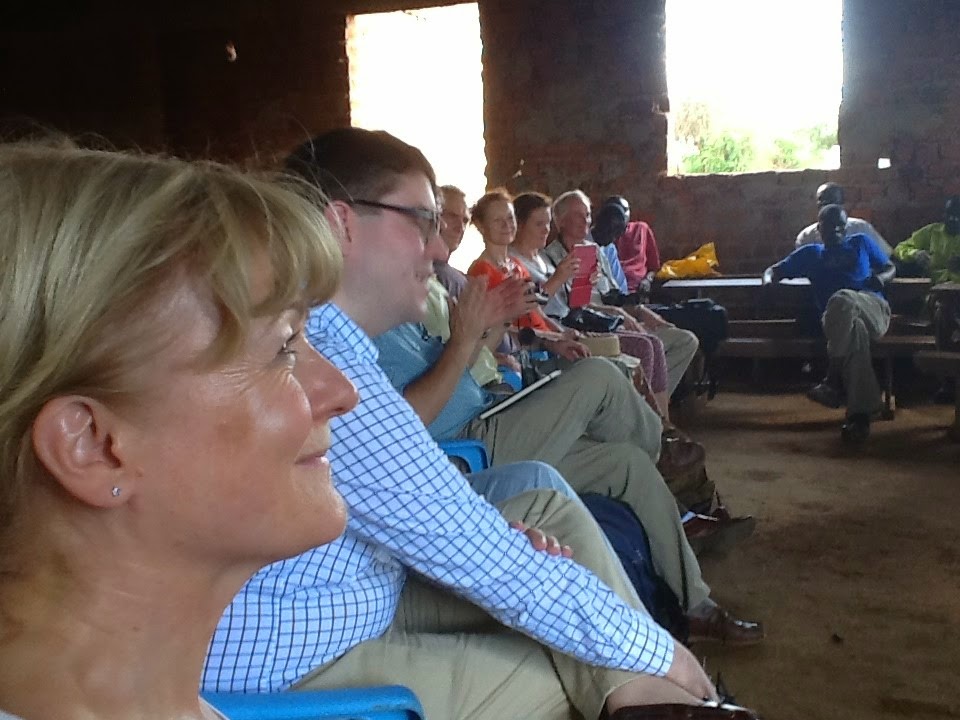 This community has moved into a having a savings and loan scheme which allows members to save, make small loans for their needs and business activities and then at the end of a year share in the interest (and fines ) paid. We saw a lady who had taken a loan to buy a cow form and heard from a woman who took a loan to buy cassava from the market which she roasted and sold to the local schoolchildren. We were shown a Love Africa money box where the savings are kept. Each box has 3 locks and is kept by a 4th person to ensure security.

In discussion it was clear that the government support was being reduced. Several local clinics where people would go for blood tests or drug supplies are being closed but the progress in this community since we first visited is immense. The community's ability to understand and live with HIV and work together is impressive.

On to Kadungulu and another extravagant greeting and a community meeting in another completed church. PEP started here in 2008. The Church leaders and community initially concentrated on resource mobilisation from the community to address local needs such as house construction (with bricks made from ant hills) new wells to provide fresh water and then starting small businesses to provide money for school fees etc . The community leader concentrated on the work of 7 community and church based groups who have developed savings and loan schemes but also have been trained in how to work as a group and to manage their funds. It turned out some of these groups were actually new PEP based groups who had moved very quickly to having savings and loan schemes (some within 6 months of forming and starting Bible studies) Each has an inspirational name chosen by their members, e.g. "talk and work group" "the narrow place that unites people"

Interestingly a couple of HIV negative people gave testimonies about wanting to join "positive" groups as they worked so well together! One man described his wife's concern at him joining a "positive" group and suspected he was secretly positive!

(In discussion Sam expressed his concern at the speed at which these groups were moving to form savings and loan schemes without going through the longer process of setting community priorities based on the PEP Bible studies and working in the community, but this is the priority being set by the new groups and in fact many seem to be influenced by the success of the initial PEP groups who act as facilitators and multipliers of PEP.) 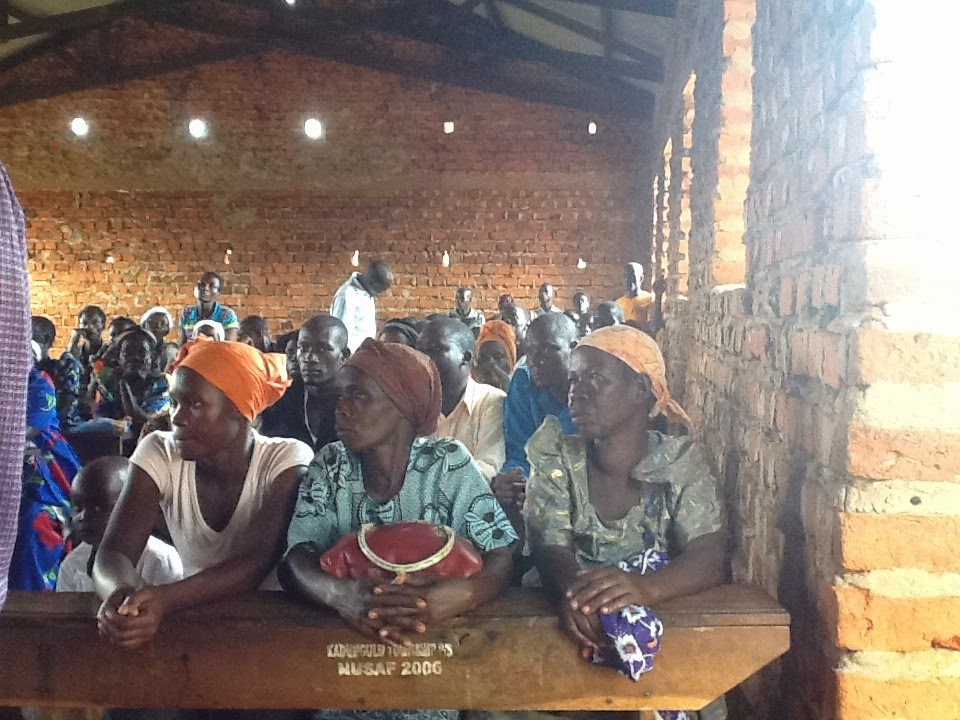 There were several testimonies from group members about the transformational impact of PEP on their lives and communities. "Boniface Ross" a PEP group leader, dressed in a suit and tie (!) said there is now no difference between me and the President after PEP. He summarised his experience of the group as;

There was a representative of the local government present and she spoke to the meeting and later showed us the way she dispensed medication each month and took blood samples every 2 months for CD4 counts Again, we heard about withdrawal of local HIV support by the local government.

The Chairman of a PEP group summarised the ethos of all the groups as "work hard, working together, working across the religions and working under God" This really caught the attention of our group.

The meeting concluded with prayers and long farewells. Sam hoped to head back to Soroti at this stage as we were running very late but the 3rd community had been waiting for our visit all day and insisted we drive another 30 minutes to a landing stage community on the lake at Kabwara where we saw a very different type of community. Four communities had joined together for the meeting. This is an isolated  fishing community with a lot of crime (a man had been murdered the night before), a site for illegal immigrants to enter Uganda across the lake and high incidence of HIV in the community from casual sexual relationships as many people do not live in family units. The leaders complained of the withdrawal of HIV testing and a long trip to the health facility in Serere. The feeling in the community that the incidence of HIV is rising in this high risk community.

The community has 3 or 4 PEP groups, which again have progressed with savings and loan schemes and were quite reluctant to speak about the community successes from PEP. We were every short of time and some people had already left as we were so late so we offered a word of encouragement that focussed on how on re-enganging with the PEP process and expecting God to create a new vision for them (Is 43, 18 and 19)

It was now very late and we were more than 3 hours from Soroti. We had an uncomfortable trip back on poor roads in the dark for the last 2 hours. Thanks to Emma and Ken for safe driving. Despite the late return the group were in good spirits, even more so when we found the hotel had kept dinner for us! The conversation at dinner was intense around the PEP process and trying to understand why the emphasis on HIV is being reduced by the government

As dinner was finishing Matthew Omgar and his wife arrived to meet with us. He sent his greetings to everyone at St James and we spent some time listening to his plans and struggles since stepping down as the Bishop 2 years ago

For the 1st day in the field this was pretty extreme in terms of travel, length of the day and the issues exposed. The first 2 communities are mature in the PEP process that St James has supported in the last 6-7 years. Compared to where they started they have made huge progress in their faith and community journeys and are now facing a more uncertain future as they need to learn to be more independent. The savings and loan schemes are clearly considered vital to their future.

It is important that an exposure visit also sees communities that are struggling and all credit to PAG for taking us to Kabwara and exposing us to the concerns of this dysfunctional community where HIV is increasing. This is exactly the sort of community where the vision of Love Africa "to mobilise the Church to stop the spread of HIV/AIDS and to care for the poor" can be made to live as we look at possibilities for future projects.

Thursday in Mbale with UWCM to look forward to, after an early start.

Please remember in your prayers:

The leadership of PAG Soroti under Bishop Sam as they discern their future in the changing environment for HIV/AIDS relief
The communities of Pingire, Kadungulu and Kabwara, the faithful pastors and PEP leaders
Give thanks to God for lives transformed and lives saved through the work of PAG Soroti and the Love Africa partnership
The group as we travel and engage with our partners
Posted by Martin at 13:45