Nearing the end but still plenty to do!

First, Nigel reports from  Iganga where he is staying with Pastor Paul: “It was a great day that included a meeting with Pastor Paul and his senior management team in the morning followed by visits in the afternoon to two of the eight CFE centres / churches supported by St James, Kiroba and Nakabugu.

The morning meeting was spent discussing the St James supported project and some of the key developments in CFE's work including the growth in micro finance to promote income generation.

CFE would describe its mission as to 'Live and labour for the holistic transformation of mankind through evangelism, church planting, discipleship training and participatory development, through health, education, income generation and advocacy.’

Microfinanance plays a key role in mobilising seed money for income generation activities.  The growth of savings and loan schemes in village communities in Uganda has been very significant in the last two years.
The visits to the two centres were inspirational as we received numerous testimonies of how the holistic work of CFE, supported by St James was changing lives and building faith.  Countless individuals sent greetings to St James and emphasised the importance they attach to the St James relationship both financially and through prayer.
God is clearly at work in these communities and it is exciting to be part of that.”

Frank writes: “Today is the first of 2 days at Tumaini Childrens Home, which creates such polarised feelings in Love Africa, and the Kakira Christian Centre where we will attend the morning service tomorrow, Sunday.

We met for a Ugandan breakfast, the best meal of the day, and negotiated with the charming management of the Paradise on the Nile Hotel for a room for our briefing meeting for the day at Tumaini. We started by considering Luke 10, 30-37 the parable of the good Samaritan with the alternative interactions, where the man asks the Samaritan, "yes but is that ALL you are going to do for me? You are very rich and I am poor, you don't understand my losses and I need you to make good. I lost my mobile phone but I really need an iPhone 5 and the laptop I lost I really need a Macbook Air...you have so much why do you only do this little for me?" We considered, as the Love Africa Steering Group has, how this could relate to Love Africa and the support we provide for our partners. We then planned the day in detail (!) our prepared drama, songs, games etc

We drove through Jinja and then the Madvanhi compound to Kakira village and the Tumaini Children's Home with big expectations for the day. We were welcomed by the children singing greetings to the "dear visitors" and Pastor Nicholas (PN) and Maria. Amazingly the programme that we planned was pretty much implemented. 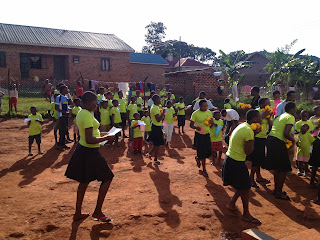 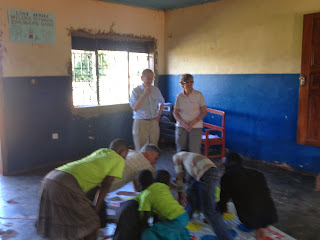 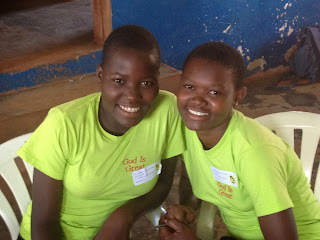 The children sang songs of welcome with rhythm and harmony and with PN's support turned over the to "dear visitors"  and introductions. While the last minute preparations were completed we went on a "Lion Hunt" with the younger children and then launched into the play we prepared of the prodigal son with simultaneous translation (which slowed some of the drama slightly) and a series of choruses led by Phil and Frank. 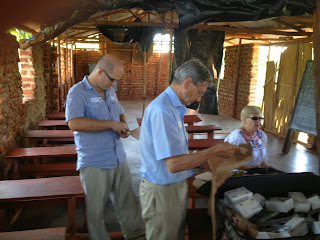 Spent, we passed back to the children who sang, presented Bible memory verses, danced extravagantly and 4 kids gave moving testimonies of how God had provided (!) in their lives and blessed them as orphans. Tough stuff to listen to. 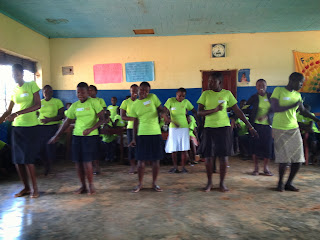 The visitors responded with a Bible verse for St James. You may remember that Martin quoted Isaiah 43, 19 "See, I am doing a new thing! Now it springs up; do you not perceive it?" at ProVision Sunday 2012 (and reminded us of the verse last week). During the May 2012 visit of the Love Africa Steering Group Martin met with one of the Tumaini kids Richard who had quoted this verse to him and Martin was inspired in his vision casting. We told the Tumaini kids this story with Richard out the front and they were wild that this message from one of their group could have been carried back to GX and influenced our whole fellowship. (Phil later videoed Richard speaking this verse and giving us a "word" for St James on how God spoke to him). The morning session concluded with Pastor Phil offering a blessing to the 4 kids whose testimonies we shared, Barbara, Doris, Annette and Richard and for all the Tumaini kids.

Before lunch the entire team had the time to meet in small groups with the Tumaini children and share life and faith stories. Everyone was overwhelmed at the openness and affection of these children as they gathered in groups of 2-10 to chat and share their stories and ambitions.

The group took a break at lunch time to set up for an afternoon of games with the kids, twister(apply for photographic evidence), paper plane making, card making, ball games, cutting and sticking and culminating in the tennis game Kevin had prepared for the kids (hence the 75 pairs of ladies tights) which all 57 kids took part in and enjoyed with unrestrained enthusiasm. It was a fantastic finale to a long day where the team from St James engaged with the kids in a loving, affectionate, unconstrained environment where we shared God's love for the kids and their deep faith in Jesus Christ.

During the last hour Phil and Frank met privately with Pastor Nicholas and Maria to think about the immediate future of Tumaini and how they can interact with Love Africa. Tumaini faces some severe challenges going forward concerning food security, education, buildings and transitions of the older kids into tertiary education and work (there are a number of very high achieving and ambitious kids in Tumaini). Maria, PN's wife has been sick recently so we had the chance to pray with her and for PN's ministry.

As we were preparing to leave after 6pm Phil and I asked innocently if we were expected to take part in the Kakira Christian Centre Service tomorrow, "Oh yes said PN, only for an hour and a half of praise and teaching the Word, and could we also lead communion and by the way Kakira Christian Centre had no bread or wine to celebrate communion, could we provide this too!" Pastor Phil paled a bit but remained calm and restrained at the prospect of preaching for an hour through a translator.

It was a weary group who returned to "Paradise" at 7pm after 9 hours at Tumaini with the prospect of leading worship and communion for 160 people tomorrow morning. Restored with a Nile special and chicken in a basket we were ready to take on the challenge to represent St James tomorrow at Tumaini. 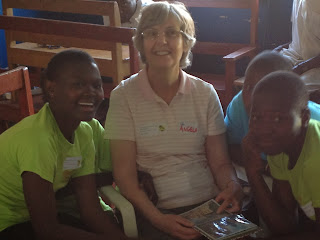 Angela with three of the big Tumaine girls

It was a wonderful day which again brought out the essential contradictions in Tumaini which we struggle with, on the one hand we support PN and Maria's huge hearts to care for 57-72 "orphans" who are educated, healthy and growing spiritually and on the other, the lack of insight and planning PN shows in leading Tumaini as his vision is inconsistent with surviving the short term. We are looking forward to meeting the Kakira Church tomorrow and worshipping with the children before we set off to Entebbe and our last night and debrief before the flight home on Monday. If you want to hear the latest we hope Phil will Skype in to Nexus tomorrow night.

In your prayers please,

- give thanks for PN and Maria, their huge hearts for these children and the love and care they offer
- give thanks for the development of the Tumaini kids as happy healthy well-adjusted young Christians
- pray for Maria's health
- pray for financial support for Tumaini and PN for his ministry in Kakira
- give thanks again for Paul and Emma from ACET as our guides and mentors and friends in Uganda.”
Posted by Martin at 13:17