REFLECTIONS OF A FIRST-TIMER

I have just come back from 9 days in Uganda visiting the 5 projects which Love Africa is currently supporting. This was my first experience of Africa; in fact, it was my first ever trip to a Developing Country.

The sights and smells were intoxicating – the countryside more beautiful than I had imagined - I had never been anywhere like it and the people so friendly – children would wave whenever we passed them in our van. 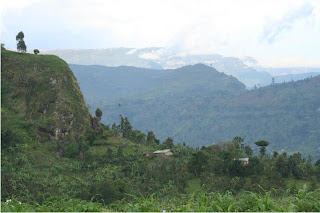 The first place we visited was the Pentecostal Assemblies of God in Soroti (about half way up on the eastern side) which runs a programme called PEP bringing church & community together. Communities take an active role in identifying their needs and being part of the solution, leading to a marked increase in self-worth and future capabilities. 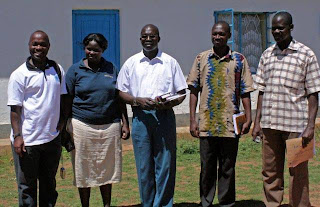 We visited a community which had undergone the PEP Program and were working very hard to become self-sustaining. Their pride in what they had achieved (hand-dug wells, mosquito nets, latrines, kitchen gardens, AIDS training etc) was palpable and I felt that ‘the sky’s the limit’ for this community. I began to realise how important it is for the local church to act as the catalyst to empower communities to drive their own development. 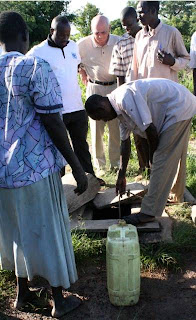 Later we visited a Drinking Club in Nakibuyi where ACET volunteers were making a huge difference with life-skills training and I could see again that these people felt empowered and had pulled together to set up a small fund for the most needy in their village even though, to me, they all looked needy.

The lady pictured here, described how she took her one blue dress off at night and used it as a blanket to cover her children and then put it back on the next day. 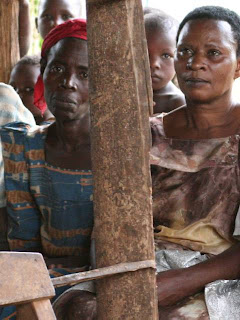 I thought about my over-stuffed wardrobe at home. These were the poorest of the poor – even the adults had no shoes, yet they presented us with ten beautiful avocados when we left. I was reminded of the incident in Luke where Jesus saw a widow putting two small copper coins into the temple treasury…………’”I tell you the truth,” he said, “this poor widow has put in more than all the others. All these people gave their gifts out of their wealth; but she out of her poverty put in all she had to live on.”’ I was truly humbled to see this in action.

Throughout our time in Uganda I felt an immense love for our brothers and sisters there. I was only just beginning to realise the sacrifices they themselves were making in order to serve the poor as Jesus did. One might be forgiven for thinking that Africa’s problems are too complex to find a solution when one looks at the poverty, disease, corruption and the legacy of colonialism but the fact that we truly are brothers and sisters in Christ makes all the difference. It just cuts through the other stuff and bonds us together in Jesus’ love. This has to be the answer.
One highlight was going to Kampala Baptist Church on Sunday morning and worshipping in spirit and in truth as one family who will be spending eternity together. It was marvellous!

God broke my heart (again!) in Uganda and I pray that he will continue to break all of our hearts until we feel the pain of our brothers and sisters in Africa as our Heavenly Father does.
Posted by Martin at 14:24