Martin and Eve Williams spent time with Love Africa Projects in October 2008 and the impact on them and us continues... 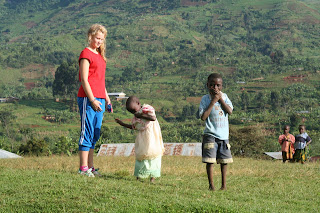 Why did you go to Uganda with your dad?
The reason I wanted to go to Uganda is because I had heard so much about it and as it is such a major part of the church life I wanted to see it for myself. Nobody really knows how tragic and corrupted the lives of many people are there, until they see it through their own eyes. My Dad was always talking about it and the pictures shown to me before my visit were only just a fragment of what you could imagine it to be like. St. James church has raised so much money for this inspiring and amazing Love Africa project, and I wanted to see what it had done to make a difference. 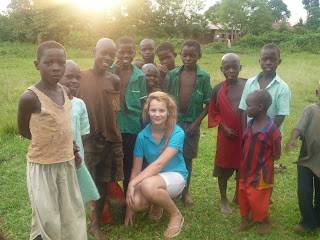 What were you expecting and how did reality compare?
The reality was completely different to what I thought. It was like I had entered a different world. The first night I had such a culture shock mixed with tiredness from travelling, and I remember crying myself to sleep. I couldn’t believe what I had seen in one afternoon and this was before I had properly visited any project. I think the thing that made me most upset was the fact that the people around me treated me as if I was royalty, by cooking what was their best, expensive food and making me feel so welcome. My Dad’s arrival and mine made their faces light up and you could see their hope and faith restoring inside of them. Watching people who had so little but making the most of what they did have made me realize how much I take for granted, especially the small things like clean running water from taps, heating and a sturdy roof over my head.

Where did you visit and where did you stay?
I stayed in various places, all very different and new experiences. The first two nights I stayed in Pastor Paul’s bungalow. For someone that lives in Uganda I would think it is a pretty good place to live in but very different to what we think of as standard English house! I slept under mosquito nets in a room off the kitchen and had a blanket to cover me. He lived in a village with many children that followed me at every opportunity possible as they were so amazed by the ‘mizungu’ (a white person) as some had never seen one before. The cockerel and the nature sounds that surrounded our room woke us. The next night I stayed in the Madhvani guest house which was luxury! This was when we were at the Tumaine Children’s home. It was the equivalent of our B&B’s and here I got served chicken and chips with a substitute ketchup (I have it on everything) but I must admit I lived without it for the week as let’s just say it was fluorescent orange. After my stay here I slept the night at Edith Wakumire’s house, one of the most amazing women you will ever meet, the leader of the Uganda Women’s Concern Ministry. Her house was one to remember, my dad and I slept in the back yard in a small room with a noisy roof that scared me as it rattled due to various animals walking on it and avocado pears dropping from the huge tree above us. We were woken by Esther, Edith’s adopted child, with her beautiful singing. 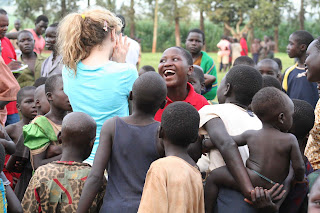 Could you see if Love Africa was making any difference to the lives of the people you met?
Love Africa has made so much difference to the people in Uganda, providing them with concrete things and giving them strength to carry on. A family of 5 previously living under a banana tree now go to sleep with a small roof over their head. Abandoned and needy children now not only have a place to live but a family, education and happiness in the Tumaine children’s home. A lot of people we met now have clothes, clean water supplies nearby and some have medication for the killer disease HIV Aids.

What would you say is the most important thing we can do to make a difference?
Although giving money is the main source of making a difference, I think such an important key to the whole of this organisation is to build relationships with some of the people out there. It’s great just sending off money to charities, but when you know what the money is going towards it makes the whole thing so much more rewarding for both the people donating and the people receiving. To be someone living out there and know that you have all these brilliant people sending money and help, and actually knowing a bit about the church makes it real. Until you go out there you have no idea how thankful the people of Uganda are for your prayers and support, believe me you are doing such a fantastic job.

Is there memory that will always stay with you?
I had that when going on major, inspirational and life changing trips there is always something you take away from it and things that you will never forget. Although what I will never forget is the smiley, joyful faces of all the orphans that now have something to live for, there is one story of from one of the women that I met that has stuck with me ever since. She is a young woman of about 30 years old; she lives high up in the mountains near all the slippery mud and far from any shops or sources. She lives in the smallest tin roofed ‘house’ with her 3 children. She is suffering from Aids, and a few years ago her husband told her he was going to fetch some water. In the early evening he still hadn’t returned and he had been gone the whole day. Next morning he still wasn’t there. It was discovered later that day that he had jumped off a nearby cliff, he had had enough of his life and decided suicide was his last resort. She is being helped by UWCM. The woman could have left her children and done the same, but think of her courage and her living conditions. She has nothing yet she was such a calm, gentle woman that sat in the shade trying to make the best of what she had. There was something so special about that woman and her bravery. If she can carry on, so can you. 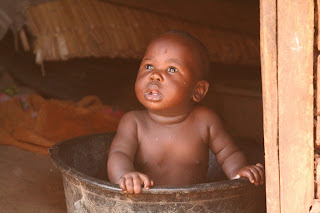