Tricia Tennant is back from WATOTO

Tricia Tennant is a long standing member of the St James Church family and has close links with the WATOTO Choir who have visited St James on a few ocassions over the years. Tricia travelled to Uganda to meet some of the WATOTO children she had hosted and to accompany Pastor Nicholas and his wife Marie from Tumaine Children's home on a WATOTO conference. Pastor Nichiolas & Marie's places were funded by Love Africa. Here is her story... 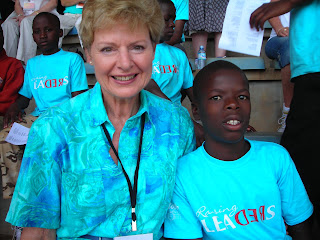 How it all began

When I was a little girl, growing up in Ealing, one of my father’s great friends from Mercer’s school, would visit us on leave. He was the District Commissioner for from 1948 – 1965. Jake would tell my brother and I engaging stories of life in the ‘bush’. It captured my imagination, and yet I never dreamed I would ever visit this wonderful country.

Back in 1996 I was introduced to the Watoto Choir at All . I was enchanted, and throughout the years have shown an interest in their development. Last year I was fortunate enough to have one of the choir sing at my retirement party. They were hosted by families in Gerrards Cross and organised a wonderful concert for us all at church on the Sunday 18th November 2007.

Then in April this year I received an invitation to go to to attend the 2nd Watoto ‘Hope for ’ conference. It’s amazing how God sows seeds in our lives. It’s like stepping stones to our purpose. ‘The opportunity of a lifetime must be taken within the lifetime of the opportunity’.

This was held at . There were 500 delegates from 25 nations. I had travelled out on my own, however, the ‘Love Africa’ team had sponsored Pastor Nicholas and his wife Maria, to attend the conference as well. It was great to spend time with them both, and also for them to learn from the Watoto model.

Our first day involved a visit to the Bulrushes Babies Home. Currently there are 83 babies being cared for. There is a ‘prem’ unit, where babies are nurtured, who have been rescued from rubbish tips and latrines in the city. People can volunteer for a minimum of a month to look after these babies. They are kept in the home until they are three and then transferred to one of the villages, where they attend school. The home had originally been the Officer’s Mess when Idi Amin had been in power, before being purchased by Watoto.

During the conference we learnt how war affected and traumatized children had been rehabilitated, having been recruited as ‘boy’ soldiers at the age of 12 for Joseph Coney’s army in Gulu, northern Uganda. It was heartbreaking to learn of the physical atrocities they had to perform on their own family members, otherwise they would have been shot themselves. Watoto is now building a village in Gulu, to support these youngsters.

The same was true for the ‘Living Hope’ project which seeks to restore the dignity of vulnerable women, by empowering them with the necessary life skills that will enable these women to become productive members of their community, so they can raise their own children and support their families.

There were workshops on Networking/Partnership; Social work; Child development; Fundraising/Financing and Village Management and Projects.

On the Saturday we were taken to the Watoto Villages in Suubi and Bbira. This is where we were able to experience life in an African village, and have lunch with the children. This was a traditional meal prepared by the housemother. It consisted of mashed potatoe, sweet potatoe, yams, goat, rice, noodles, beans, matouki (roasted banana) with peanut sauce, and chicken. 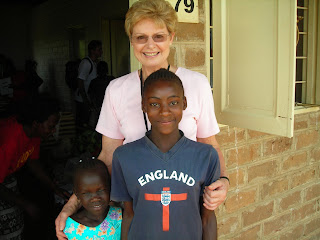 At The WATOTO Homes

Each house consists of six rooms and accommodates, eight children – four girls, four boys;Eight houses are built around a central green play area, which is the traditional way of an African village in the bush. It was a real bonus to actually meet some of the choir members who sang at my party!

On Saturday evening we celebrated the African child in a unique cultural experience of African dance and music. I loved the drums! There was a firework grand finale.

My lasting impression was the degree of excellence that Watoto promotes. This is achieved by the incredible sponsorship programme, and the income raised by the choir tours throughout the world. The children only get to go on tour once, so everyone gets a chance. Their faith in God shows, and the gratitude from being rescued from the streets, lights up in their smiles. All the homes and schools, medical clinics, and facilities, are built by volunteers, who raise the money themselves prior to going to , so that all materials are purchased and supervised locally. By the end of a two week period the buildings are complete. It was an incredible experience and one I shall always treasure.

Thirty one delegates were taken on a safari to . We had a seven hour journey by bus to Paraa Safari Lodge on the edge of the great river . It was wonderful to see the real , once we left . The road was not made up and consisted of many pot holes in the red dusty sand. We had a stop in Masindi. We saw many small, scattered villages along the way; colourful markets with brightly coloured vegetables and fruit; children walking to school at 6.30 in the morning , barefoot; women carrying water pots and huge straw bales on their heads; men walking with sugar cane, and carrying chicken ready to be plucked. 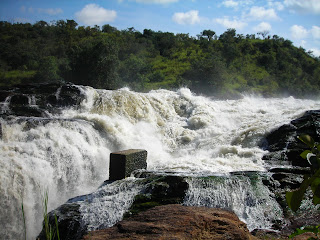 Such a beautiful country

The safari was so worthwhile to observe many animals in their natural habitat, and at such close quarters. I loved the trip on the up to the Falls. We even had the added bonus of a rainbow! A reminder of God’s promises to His people.

Then it was back to where Pastor Nicholas was taking me to Kakira.

The afternoon was spent at the counselling centre in Kakira. The women had met for a Bible Study and I was asked to speak and encourage them, through Pastor Patrick who translated. I shared some of my family history and mentioned I had one son. They laughed, and I wondered why! It was because most of them had 8 or 9 children! I warmed to these ladies. They worked hard. They lived in very poor conditions, in makeshift homes, with possibly a mattress on the floor, but little else in the way of furniture. When it rains, it comes down thick and fast, and soon the roads are awash in thick red mud. The children are scantily dressed and most do not own shoes. Cows, goats and chickens wander all over the place, scavenging for food. There’s one central point to collect water. That evening, when I returned to the Madhvani Guest House I was trying desperately to assimilate all I’d seen and heard. 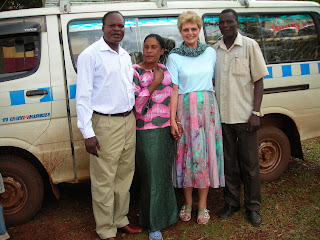 On the Friday I was taken to the source of the River Nile at Jinja, and then on to . That evening Beatrice and Grace helped Maria, and I had the most delicious Supper at the Centre. All the ladies were so generous. Whatever they had they shared with me. It was very humbling. In Swahili I am ‘Mamuke Musungu’, a white woman.

On the Saturday I was taken to the children’s home that St James supports. This is situated on a huge sugar plantation called the Kakira Sugar Works which was established in 1985 by the Madhvani family. It is totally enclosed by Security and there were checkpoints where our permits were inspected. I

On arrival, all the children at the home greeted me with a special song they’d learnt. A lot of the house parents were present as well. Pastor Nicholas spoke and told of his plans for the future. I’m not used to speaking in public, however, it seems a visitor, is expected to bring words of encouragement to the children and adults and it’s something they expect quite naturally!

Touring the home it was good to see the work that Heath and Barbara Drewett had done in the summer, was continuing. All the mosquito nets that Heath had erected were over the beds, and the children had their Promiseland Bibles, either in their little suitcases by their beds, or in the ceiling rafters. 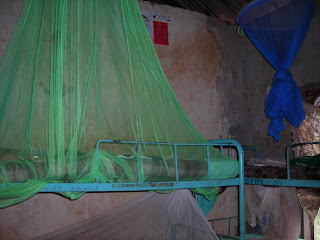 The nets brought by the Drewetts are still there!

Work is still in progress at the home. Betty the Matron, and Charlie the Warden were introduced, before lunch was served to the children. This consisted of bowls of mashed potatoes and beans in sauce. The children all line up and wait their turn. It’s amazing to me that all this food is prepared in huge vats on a single charcoal fire, outside, under a makeshift roof. 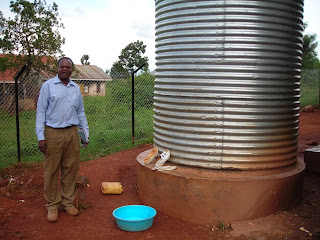 A water tap has been installed. Part of the St James funding. Ongoing work will provide a pump. The showers and latrines are yet to be completed, and work on the roof has to be finalised. The surrounding land will eventually be developed for a school house and a possible conference centre. Pastor Nicholas has a huge vision.

We ended the day at the children’s camp at the Kakira Sugar Works, where some of the older children instructed the younger ones with a Promiseland theme. The Drewetts did a good job. It was good to see the T-shirts being put to good use. 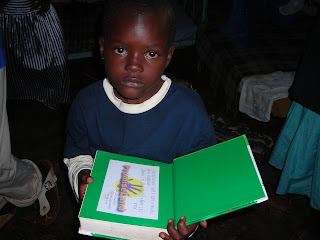 I left with a heavy heart. The need is so great. I wondered how on earth we’d ever make any progress in relieving their plight.

One thing I learnt at the conference, is that it’s not about status, but service. ‘A man goes out on a journey with one staff. Two is a burden’. ‘If you want to be first, go alone; if you want to go far, go together’.

I guess that’s what it was all about for me. Yes, I was a woman alone, just one member of a congregation, of a caring Church, that wants to make a difference. Together.

It’s not about the money, it’s about building relationships.

I felt the love these people so warmly gave me. The love and the sharing touched my heart and the glorious smiles and big brown eyes that reached deep within my soul, that I will never forget. We just have to start where we are. In our own little pond, and see how far the ripples will travel.