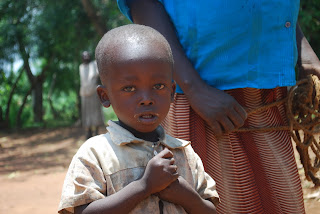 After a 2 hour drive the night before, we set off from the Mount Elgon Hotel in Mbale to meet with Edith Wakumire at the Ugandan Women's Concern Ministry just outside the town. Edith was a familiar name to us as we had heard much about her (and her famous smile!) from Martin Williams.
We spent some time with Edith and her team during their morning devotions, and the team members talked us through each of the three main areas of the UCWM's work - namely, women, children and their fight malaria campaign. It is a huge ministry, covering a wide geographic area and meeting significant need, exacerbated by extreme poverty in the local region. The ministry teams appeared very structured in their work, establishing clear criteria for those who UWCM chooses to support with its relatively limited resources.\
After some time with the team, and an opportunity to walk around the site of the offices, we headed out to the "field". We took the van through narrow paths off road and arrived at the house of two teenage mothers - both with children already, and one pregnant again. This "child-headed" household crossed over two areas supported by the women's ministry section of UWCM - single teenage mothers, and child-headed households. The conditions of the children's home was the poorest we had witnessed close at hand. We spent some time with the girls and their siblings before making our way back to UWCM.
Our afternoon was spent travelling back to Kampala, where we met up with our build team once again!
Posted by Martin at 06:39