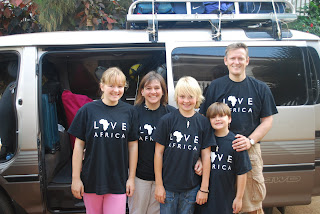 Today we visited Pastor Nicholas and his wife Maria at their church - Kakira Christian Centre. We arrived late (after struggling to fit all our luggage in and on top of the mini bus) and so only mananged to catch the last two and half hours of the service including a 90 minute sermon by an American missionary!!!!! It was very hot in the school building and there was a bat flying around in the eaves. Piers did really well and only started asking 5 minutes before the end when the service was going to finish - but at thirty second intervals! - at which point Barbara took him out. They were greeted outside by hundreds of children all eager to have their pictures taken. When they came out Olivia and Elliot vowed never to complain about the length of a service at St James again!
In the afternoon we set up for the holiday club at Tumaine. We were initially shocked by the general disrepair of the building but the children and staff were welcoming fron the very beginning. We set up the football goals and they were immediately very popular.
Posted by Martin at 19:00