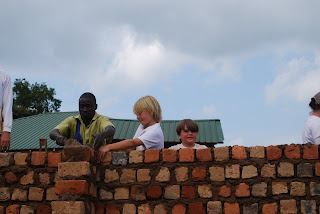 An early 6.00 rise for a full day at the build site today. A very dusty first few hours moving the bricks closer to the site to build. Long lines of volunteers passing, and occasionally throwing!, bricks to one another.
Our lunch break from the build brought the most excitement though. We wandered into the village and met three of the girls who had stayed with us in GX over the years. Jane (18) who had visited the UK on the tour in 2000, Sharon (15) from the 2003 choir tour and Ruth (13) from the latest choir which visited St James in November 2007! It was quite amazing to see them all again. We actually visited Ruth's house and met with her mother and some of her sisters. Her mother had not been well and all the girls had been doing chores (cleaning etc.) for her during the morning. She was clearly proud of her house and her girls, and asked Ruth to show us her school report. 100% in English was just one of the highlights of her end of term results. Ruth's mother makes the girls speak English in the house, as well as at school. Despite this, the children speak to each other in Bugandan. It is fun to see the children who we met alongside their sisters in the village - and they were pleased to show us into their (very clean!) houses.
We had our first exposure to Ugandan wildlife today, seeing 2 monkeys in the trees on the driveway up to Watoto, together with a huge rhinocerous beetle crawling out of the cement. We left it on the wall to dry out and recover - which it duly did.
It is great to work together with a team of christians from all over the world and the days, and work, is very much covered in prayer. We are also looking forward to going to KPC (Kampala Pentecostal Church) to a praise rally in the evening. We have been told that it is going to be lively.
Posted by Martin at 16:39